Marriage Ritual and Youth Culture in the Jewish Society in Italy during the Sixteenth and Seventeenth Centuries. R. Weinstein. The Jewish communities in Italy harbored a deep-rooted and rich Youth-Culture. Local written sources are biased and hostile towards that phenomenon and document its existence only slightly. The local marriage ritual discloses another perspective on the life of young unmarried men and women who created a parallel marriage pattern. Match-making, act of betrothal, property transference, courtship, donation exchange, wedding day and consummation — all had their double versions of adult versus the juvenile. They unveil different attitudes to property, leisure habits, and sexual patterns in pre-marriage years. Community authorities reacted in ambivalent mode towards the young. They objected their interference in family matters involving important interests, at the same time they defended local youth culture against non Italian, i.d. Ashkenazi and Sephardi traditions carried by Jewish immigrants. The entrance of Jewish population to crowded and over-populated Ghettos in Italy during the 16th and 17th centuries enhanced the control over the young. A similar tendency might be traced in Christian society in Italy at that time. Thus Jewish and Christian local youth comportments should not be separated, they belong to the same spectrum. 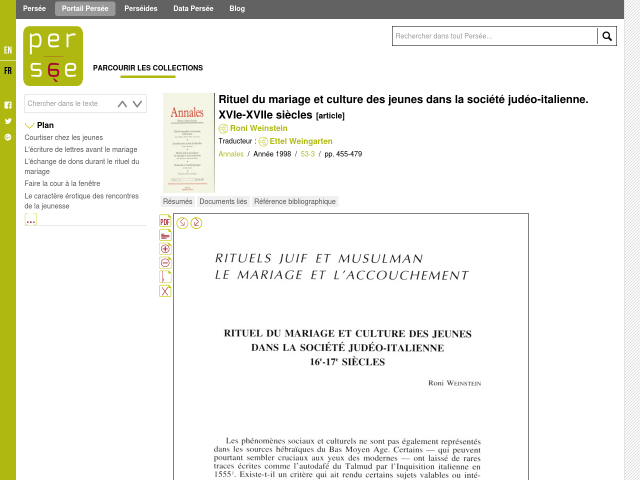