Where the Past Was, There History Shall Be

As the proverb has it, ‘tradition is not to preserve the ashes but to pass on the flame’. Taking this image as a starting point, this paper is interested in non-conservative concepts of tradition and (dis)continuity. If the concept of tradition is normally associated with continuity, the concept of tradition poses the question of transmittability. Is there a continuous medium in which narrations, customs, rites or other material practices can be handed down from the past to the present? If the transmittability of tradition is not a given, a commodified object, but subject to historical change, the question of tradition and inheritance is inextricably linked to social and political struggles. The concept of tradition, however, has mostly been theorized by conservative thinkers. In this vein, traditional historical materialism viewed tradition as a counter-progressive retarding force. Walter Benjamin (1940), however, proposed a different concept of historical time and tradition. History is not based on a progressive flow of “homogeneous, empty time” but on disruptive constellations of the present and the past. The past is never fully gone; it can never be fully historicized. The medium in which the present is connected to all lost causes and struggles of those who literally and metaphorically lost their histories is called the “tradition of the oppressed.” Paradoxically, this medium is a discontinuum – its texture is woven out of struggles, empty-spots and disconnected elements which cannot be represented in one transmittable image or inscribed into one multifaceted yet coherent world-history. If the “tradition of all dead generations weighs like a nightmare on the brains of the living” (Marx), then the tradition of the oppressed will also haunt all attempts to repress it completely and erase its experience in the linear continuum of “victor’s history.” But how are we to pass on an oppressed tradition? How can the tradition of the oppressed be recalled, actualized and “worked through”? 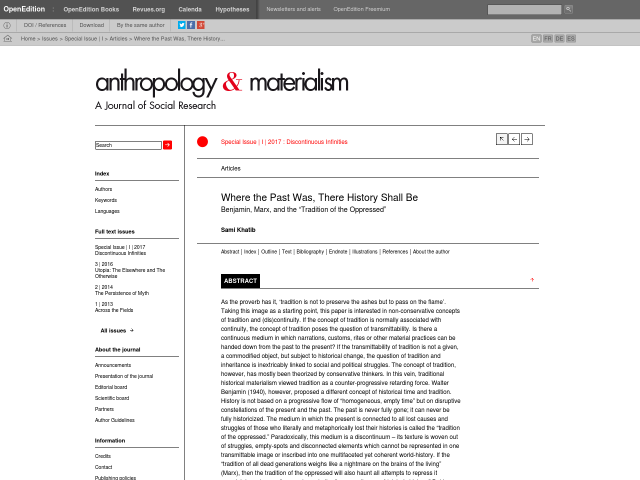