In the late 1910s and early 1920s, Walter Benjamin writes a set of fragments providing an original insight into bodily awareness and embodiment. Rejecting the natural-scientific conception of the body as organism, Benjamin implicitly resorts to the phenomenological method to grasp this elusive ‘object’, which pertains to the ego (as ‘lived body’ - Leib) and to the world (as ‘thing-body’ - Körper). Yet, contrary to Max Scheler and Edmund Husserl, Benjamin does not try to bridge the gap between the objective and subjective modes of appearance of the body. He instead exploits the rift that the philosophical splitting of the body opens in the individual in order to overcome the boundaries on which the concept of identity is grounded. This early phenomenology of embodiment sheds light on Benjamin's distinctive reception of Marxism, notably on the utopia of a revolutionary collective physis sketched in the late 1920s and in the 1930s. 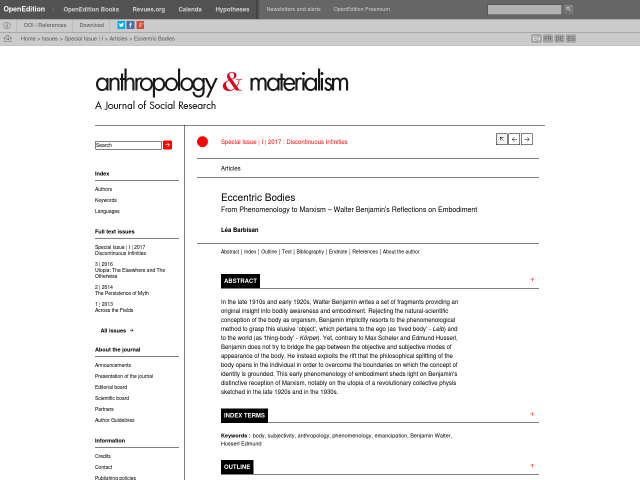