Human skin is innervated with different tactile afferents, which are found at varying densities over the body. We investigate how the relationships between tactile pleasantness, sensitivity and discrimination differ across the skin. Tactile pleasantness was assessed by stroking a soft brush over the skin, using five velocities (0.3, 1, 3, 10, 30 cm s −1), known to differentiate hedonic touch, and pleasantness ratings were gained. The ratings velocity-profile is known to correlate with firing in unmyelinated C-tactile (CT) afferents. Tactile sensitivity thresholds were determined using monofilament force detection and the tactile discrimination level was obtained in the direction discrimination of a moving probe; both tasks readily activate myelinated touch receptors. Perceptions were measured over five skin sites: forehead, arm, palm, thigh and shin. The assessment of tactile pleasantness over the skin resulted in a preference for the middle velocities (1–10 cm s −1), where higher ratings were gained compared to the slowest and fastest velocities. This preference in tactile pleasantness was found across all the skin sites, apart from at the palm, where no decrease in pleasantness for the faster stroking velocities was seen. We find that tactile sensitivity and discrimination vary across the skin, where the forehead and palm show increased acuity. Tactile sensitivity and discrimination levels also correlated significantly, although the tactile acuity did not relate to the perceived pleasantness of touch. Tactile pleasantness varied in a subtle way across skin sites, where the middle velocities were always rated as the most pleasant, but the ratings at hairy skin sites were more receptive to changes in stroking velocity. We postulate that although the mechanoreceptive afferent physiology may be different over the skin, the perception of pleasant touch can be interpreted using all of the available incoming somatosensory information in combination with central processing. 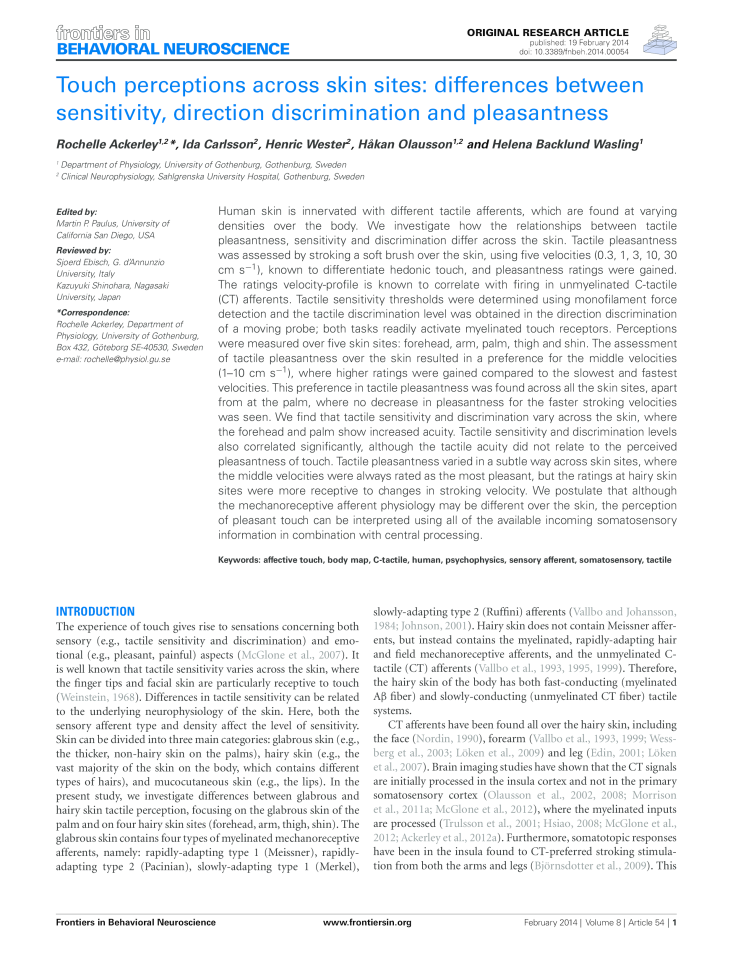