The subject of this thesis is an investigation of the Baha'i Movement in the British Isles during the first three decades of the last century, which is an hitherto un-researched subject. The first discovery is that the Baha'i movement was an inclusive supplementary religious movement, not requiring the renunciation of existing beliefs and connections, and in this it is to be sharply distinguished from the exclusive Baha'i Faith which was to follow. Through the use of archival material, journals, newspapers, books and pamphlets it has been possible to identify practically all of the eighty or so people who identified as Baha'is during the period. They were found to be, in most cases, many-sided colourful characters, who were linked by networks, which are identified and the particular nature of each discussed. The visits to Britain of the charismatic leader 'Abdu'l Baha to Britain are analysed, in particular for what he said and did, but also to establish the interplay of the networks during the visits. The First World War brought the break up of several networks and the death of 'Abdu'l Baha in 1921 brought the end of charismatic leadership. This marked the beginning of an administration which alienated those whom old age and infirmity had not already removed from the Movement. The demise of the Baha'i Movement meant there was almost no continuity between the Movement and the establishment of the Baha'i Faith in Britain around 1936. Theoretically, the exposition is made within a modified form of Sperber and Wilson's Theory of Relevance. Although networks are now a commonplace in sociological theory concerning religion, and the establishment of the administration a fine example of the routinisation of charisma, a supplementary religious movement of this kind which required no 'conversion' needed a new approach. The notion of degrees of relevance supplied this need. Accordingly a modified theory of relevance is developed in the Introduction and serves well to account for how the inchoate Baha'i message was disambiguated and enriched variously by the different networks. As the 'message' became clarified, for some relevance diminished. Not all religious relevance is cognitive and epistemological so the concept of ontological relevance is developed to account for the effect of the presence of a highly spiritual person. Finally 'Abdu'l Baha is found to be a master of relevance and his explanation of relevance is examined together with criticism of Baha'i missionary techniques on the grounds of excessive relevance. 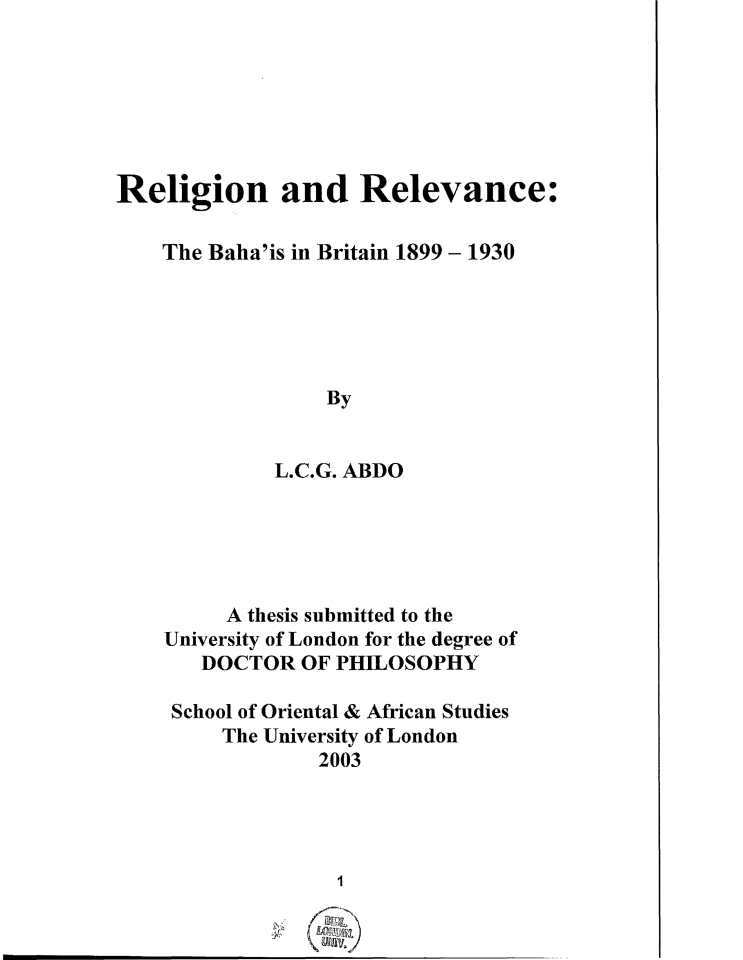