In 2011 and 2012, two mountain climbers, John Harlin and Lionel Daudet, undertook individual journeys to follow the entire political border of an alpine country, respectively Switzerland and France, each unaware of the approximate concomitance of their projects. Harlin and Daudet decided to use the imaginary line drawn on a map by political administrations as the pretext and backdrop for a totally new adventure. Their aim was to follow a border along its entire linear route, the abstract nature of which is generally only experienced when one crosses it from one country to another. The self-imposed constraints thus provided them with the basis for a new type of mountaineering, one which involved not only confronting the complex mountainous terrain followed by the borders in Switzerland and France but also practicing a variety of outdoor sporting activities: we suggest referring to this challenge as ‘experimental mountaineering’. These projects undoubtedly mark an important change in the practice of mountain sports, where the mountain tour, or circular route, is in the process of earning its place alongside the more traditional summit climbs and mountain crossings. In putting their bodies to the test in following the border, these two men have shown how the idea of the “mobile” border is able to express itself in the form of a constantly renegotiated juxtaposition of spatial characteristics generated by the presence of a limit. The exploits of Harlin and Daudet encourage us not only to go further in our analyses of the affective and physical processes of the body that contribute to the complexity of our relationship with space, but also to refrain from making the body the last “natural border”. 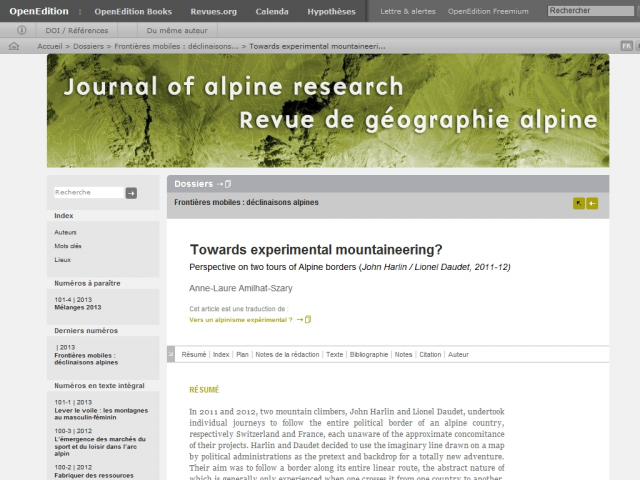