For her "tragicomedies of manners", The Romantic Comedians (1926), They Stooped to Folly (1929) and The Sheltered Life (1932), Ellen Glasgow chose a common setting, the fictional town of Queenborough. Although she modeled it mainly on Richmond, Virginia, she meant it to represent "the distilled essence of all Virginia cities rather than the speaking likeness of one". The portrait she drew was dictated by the period, the turn of the century—a time of societal, economic and architectural changes. Queenborough stands at a crossroads, poised between a past holding it back and a future pulling it forward. Glasgow finds herself in the same predicament, wanting to welcome progress but simultaneously eyeing it with suspicion, as it entails industrialism. The city she presents is on the verge of becoming a new Babylon in a southern setting, especially in the last novel of the trilogy: limits between districts become blurred, the foundations of Virginian society are shaken, and the advent of progress is symbolized by a bad smell that invades formerly smart neighbourhoods. Queenborough acquires a metonymic dimension: it is Virginia, it is the South as a whole. 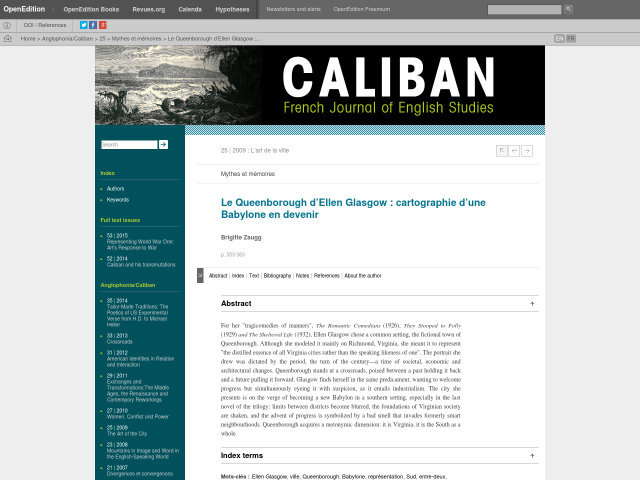