In Dramatis Personae, Belfast playwright Stewart Parker thanked Bertolt Brecht for bequeathing to Northern Irish playwrights "a sense of drama as a potentially dynamic force in society, as a medium political by its very nature, as a forum in which many ideas may thrive and be communicated." The context in which Brecht wrote his plays - i.e. 1920s Germany - indeed shares similarities with the 1970s Troubles in Ulster. Therefore, the fact that Brechtian drama is one of the means of expression that is resorted to in reaction against a given political system has led me to study the Brechtian borrowings in Northern Irish drama. Bearing in mind that Brechtian drama can be considered as a theatrical genre is meaningful. So it is more than the influence of the playwright Brecht that we must talk about today, for one of the objectives of Brecht's was that his dramatic theory became an institution, created a trend and new aesthetics linked to that trend. These were above all meant to be transmitted. This trend, these new aesthetics seem to have been exported to Northern Ireland. In this article I shall demonstrate that The Force of Change by Gary Mitchell, written after the Good Friday Agreement (signed in April 1998), borrows Brechtian techniques and has epic undertones. The study of many of the devices in the text which enable me to assert that this play carries Brechtian characteristics also shows the will of the author to move beyond a naturalistic vision of the Troubles in Northern Ireland. In other words, it is an attempt to reshape the contours of Northern Irish drama, a change which echoes the evolution in mentalities of the inhabitants. 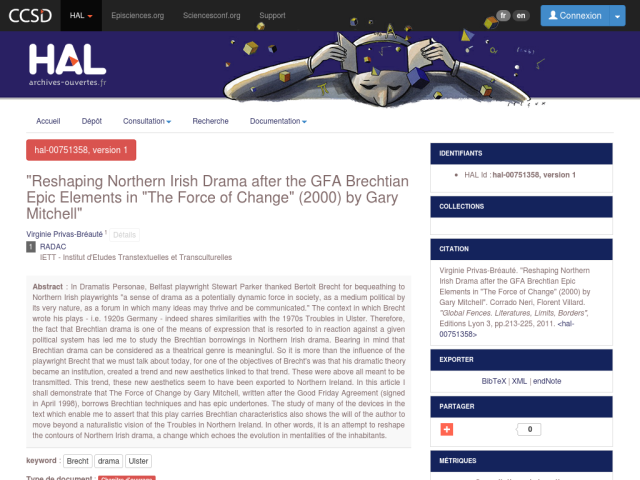