2017 International Council for the Exploration of the Sea , info:eu-repo/semantics/openAccess , restricted use

The Benchmark Workshop on Baltic Stocks (WKBALT) 2017 included an initial data collection workshop (DCW) 7-9 December 2016 and a benchmark meeting 7–10 Feb-ruary 2017. The group worked by correspondence between the two physical meetings. No specific official ICES data call took place in relation to the meeting. The DCW was chaired by an ICES chair: Margit Eero (Denmark). The benchmark meet-ing in February was chaired by an ICES chair Noél Holmgren (Sweden) with the as-sistance of the external chair Verena Trenkel (France) and an ICES chair Margit Eero (Denmark). Two external experts reviewed the work conducted and provided com-ments and input during the discussions: Niels Hintzen (Netherlands) and Jim Seeb (USA). The benchmark addressed originally three stocks: cod in Division 3.a East (Kattegat) and Herring in Subdivisions 30 and 31. During the DCW, the decision was made to merge the two herring stocks into one, and the benchmark thus continued with as-sessing the combined herring stock: Herring in SDs 30 and 31 (named herring in the Gulf of Bothnia). The decision for merging the two previously separate stocks was based on biological evidences or lack of these, on lack of data for conducting a separate assessment for SD 31, as well as management considerations. For cod in the Kattegat, the main issues were related to explaining the unallocated removals that have been estimated to have occurred in recent years. Genetic studies revealed substantial presence of North Sea cod in the Kattegat area, and data on seal diet and population abundance suggested a higher natural mortality than previously assumed in the stock assessment of this stock. The data were however considered in-sufficient to directly include them in the stock assessment. Nevertheless this new in-formation substantially improved the understanding of the causes for the unallocated removals estimated by the assessment model. There was lack of consensus among the experts concerning the most appropriate assessment approach to proceed with under current data conditions. WKBALT concluded to continue developing an analytical stock assessment, with the aim to use the assessment results quantitatively instead of only indicative of trends, which was supported by the external experts. However, work is still needed before this can be achieved and that work was continued after the WKBALT meeting. Unfortunately, it was not possible to complete this work within WKBALT. Thus, WKBALT finally concluded that the WGBFAS 2017 assessment should be based on SPALY (the same procedure as last year), i.e. the assessment based on a SAM model, where the results are used in the form of trends only rather than absolute values, with a few revisions in catch and survey input data. At the same time, further work towards quantitative use of the stock assessment results is ongoing, pos-sibly leading to an inter-benchmark process. For herring in SDs 30 and 31, the modifications made to the input data included ad-justing the age of the plus-group (increased from 9+ to 10+), revising natural mortality values, and revising the calculation procedures for the commercial tuning series. Ex-cluding the commercial tuning indices from the assessment (that was one of the aims of the benchmark according to the issue list) was not successful, thus the assessment continued to include the commercial tuning indices. Reference points were re-esti-mated for the new combined stock, and considering the modifications to the input data. 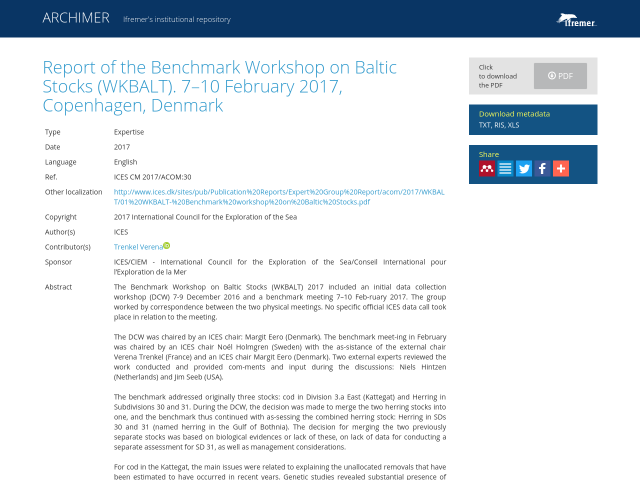