The philosopher Hannah Arendt (1906-1975) strongly challenged the political theory of the 20th century by positing a momentous conceptual distinction. In her books The Human Condition, On Revolution, and On Violence, she developed the thesis that power and violence are two political phenomena with opposite causes and effects and therefore have to be distinguished radically. Arendt re- reads the political history of the present time in light of the contrast between power and violence, and establishes a new understanding of revolution and de- mocracy, economic rationality, and total domination. Her conviction that the freedom--related dimension of politics is measured by its ability to avoid and transform violence in its diverse facets serves as a starting point for her political philosophy. The present work analyzes Arendt’s political philosophy by placing its focus on her descriptive and normative distinction between power and violence. The contrast between both concepts offers a key to understanding important as- pects of Arendt’s political thinking that are not fully developed neither by Ar- endt herself nor in the literature on Arendt. One the one hand, this calls for a more detailed definition of both the concept of power, understood as the power to enable as well as the power to enforce, and the distinction between the con- cept of power and the concept of violence. On the other hand, Arendt’s em- phatic notion of power, understood as a practice of beginning, sharing, and participating, is to be critically examined with respect to its limitations and ex- clusions in order to demonstrate where in Arendt’s own theory of power violence is implicitly inscribed and how power and violence might interact on a political level. The book offers a detailed reconstruction of Arendt’s understand- ing of power and violence and discusses its actual relevance for a political the- ory of democratic practices. 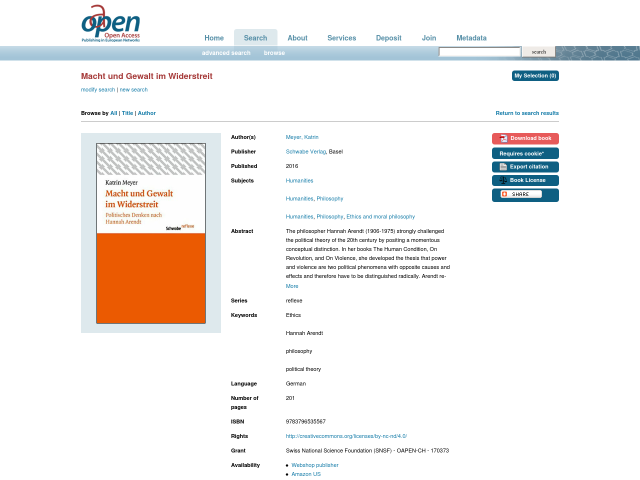