Between the first Russo-Chechen war of independence (1994-96) and the resumption of the conflict in 1999, the range of actions employed by the Chechens evolved, as did the intensity of Russian army operations. While ambushes against the latter have remained the Chechen combatants' principal mode of action, recent developments in the conflict have been marked by the emergence of suicide attacks. The first war ended with the signing of the Khassaviurt accord in August 1996 , following the serious setbacks experienced by the Russian army. A treaty was signed in 1997 prohibiting the use of force in relations between the two countries. However, the situation in an independent Chechnya turned out to be difficult. The shattered economy left between 80 and 90 % of the working population jobless . Russian promises of reconstruction in fact resulted in the economic isolation of Chechen territory through checkpoints set up all along the border. On the domestic scene, elections were organised in 1997. The candidates who were the most intransigent towards the Russians, and who had Islamist leanings, such as Basayev and Udugov (Minister of Information under President Dudayev), were outnumbered by Maskhadov, the head of the Chechen army known for his willingness to compromise and negotiate with the Russians. Yet Maskhadov had great difficulty in establishing his authority over the whole of Chechnya, with certain warlords refusing to retreat. In October 1999, Dagestani and Chechen Islamist combatants, led by Basayev, made an incursion into Dagestan in order to provide assistance to Wahhabi villages. In doing so, they gave the Russians an excuse to invade Chechnya again. On the Russian side, the second war was marked by far more extensive bombings, village "sweeps", the establishment of "filtration camps", ransom-taking, etc. In addition to traditional guerrilla methods, in 2000 the Chechens began launching suicide attacks against the Russian army, as well as against the pro-Russian Chechen administration, for which Basayev generally claimed responsibility. The suicide attacks were strongly influenced by the idea of shahid, or Islamic ''martyr". Websites for many jihadist organizations readily portrayed Chechnya as one of the fronts where Muslims were being oppressed by kuffar, or "infidels", in this case Russians. The Russians immediately highlighted this state of affairs and made a direct link between such actions and Al Qaida-style international terrorism. The suicide attacks, rejected by the people, were then presented as the result of foreign influence, i.e. the "Wahhabis". Thus arose the issue of the ''Palestinization'' of the conflict, officially referred to for the first time in June 2003 by FSB (ex-KGB) director Nikolai Patrushev, as well as by certain journalists such as Anna Politovskaia . But does the increase in suicide attacks in Chechnya mean the Chechen struggle has been co-opted by international jihadist movements? The theory we will develop here attempts to highlight the evolution of that struggle from nationalism to Islamic nationalism, as the discourse justifying the war is increasingly filled with religious references, while the issues at stake have remained nationalist. Such references are also historical, as they were already present during the anti-colonial struggles in the 19th century. Moreover, although the use of suicide attacks is part of the evolution towards Islamic nationalism, this increase in sacrificial violence cannot be attributed to the Islamists alone. Indeed, the latter were very present during the first Chechen war when such actions were not employed. Other aspects must therefore be included in order to understand this change. We must be careful in our analysis in any case, as the inaccessible terrain makes it difficult to evaluate the real impact of references to martyrdom on the population and groups of combatants. 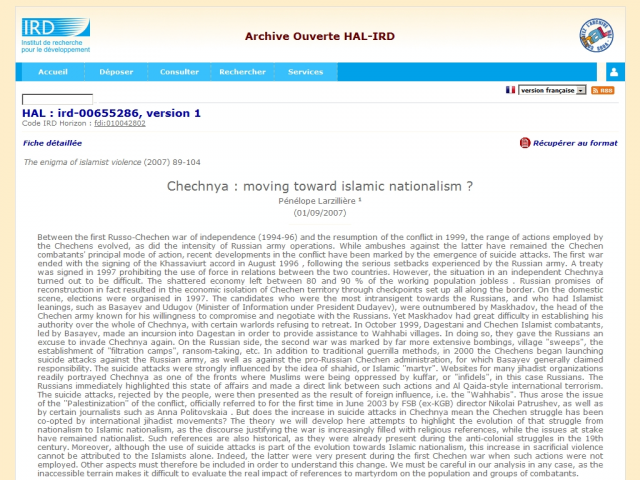