Gamma oscillations in V1 are correlated with GABA(A) receptor density: A multi-modal MEG and Flumazenil-PET study.

High-frequency oscillations in the gamma-band reflect rhythmic synchronization of spike timing in active neural networks. The modulation of gamma oscillations is a widely established mechanism in a variety of neurobiological processes, yet its neurochemical basis is not fully understood. Modeling, in-vitro and in-vivo animal studies suggest that gamma oscillation properties depend on GABAergic inhibition. In humans, search for evidence linking total GABA concentration to gamma oscillations has led to promising -but also to partly diverging- observations. Here, we provide the first evidence of a direct relationship between the density of GABA(A) receptors and gamma oscillatory gamma responses in human primary visual cortex (V1). By combining Flumazenil-PET (to measure resting-levels of GABA(A) receptor density) and MEG (to measure visually-induced gamma oscillations), we found that GABA(A) receptor densities correlated positively with the frequency and negatively with amplitude of visually-induced gamma oscillations in V1. Our findings demonstrate that gamma-band response profiles of primary visual cortex across healthy individuals are shaped by GABA(A)-receptor-mediated inhibitory neurotransmission. These results bridge the gap with in-vitro and animal studies and may have future clinical implications given that altered GABAergic function, including dysregulation of GABA(A) receptors, has been related to psychiatric disorders including schizophrenia and depression. 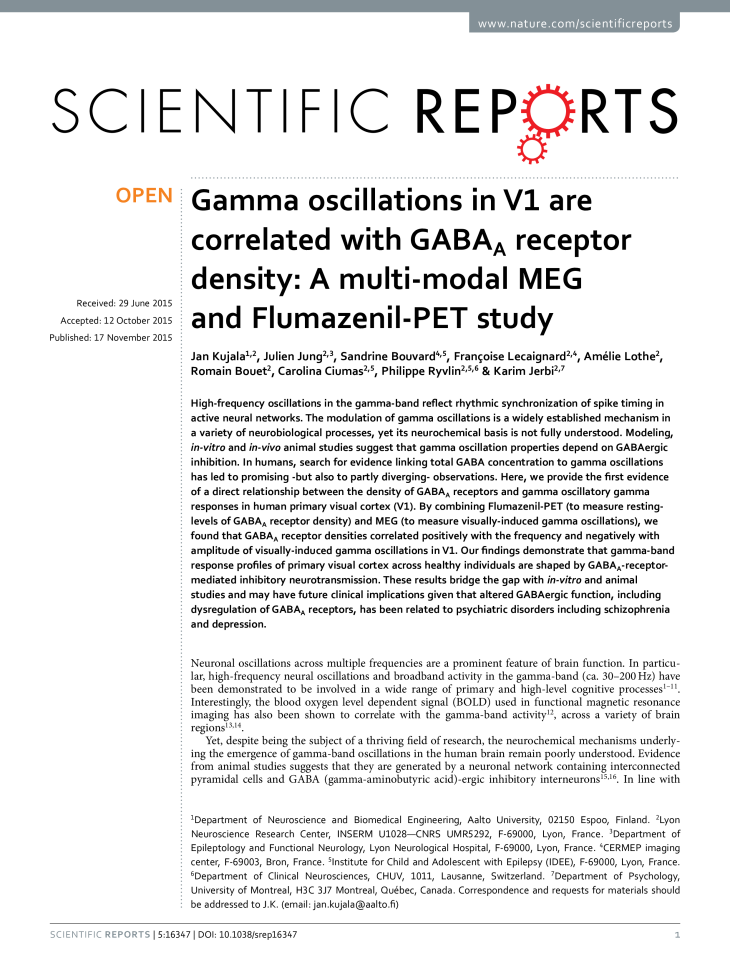