Across France, workers are insisting that they be allowed to make masks and ventilators rather than continue with business as usual. Their initiatives show that when workers, not stock prices, decide what’s being made, production can serve the needs of society as a whole.Coronavirus has become a global crisis; official figures tell us that more than 3 million people have already been infected (some estimates put the number ten times higher), and more than a quarter of a million have died. In the bid to contain the virus’s spread and reduce the strain on hospitals, over 3 billion people are on lockdown. In this context of crisis, many analysts have pointed to errors in initial risk assessments, against a backdrop of structural unpreparedness and budget cuts. Government pronouncements regarding masks — initially considered ineffective, before they were deemed essential — speaks to the contradictions and fluctuations in public discourse on the pandemic.Yet the focus on government action — as symbolized by the daily ritual of televised press conferences offering updates on the situation — should not obscure the initiatives and the work that is being done by other social actors. As shown in the weekly tracking from French statistics agency DARES, the country’s labor market has been deeply affected by the state-imposed lockdown: since the second week of April, 11 million workers in France have filed unemployment claims, mainly among small and middle-size businesses (83 percent in firms with under 250 workers). In this context, the divisions that structure the labor market seem to have been aggravated. As France comes out of one of its largest workplace conflicts in history — also coming after the gilets jaunes protests — the world of labor is experiencing a new series of social tensions. They are not very audible because opportunities for collective action are limited by COVID-19 precautions; the spread of partial unemployment, remote work, and layoffs has also largely atomized workers. But how are these social tensions structured — and are they likely to have an effect beyond the current health crisis?Even though the data is scarce and fragmented, some do point to major conflicts traversing the world of labor today — ones that assume an unprecedented role and visibility during the current crisis. For instance, if the coronavirus crisis highlights the failure of public policies to “rationalize” public health costs, it also reveals the extent and failure of an economic model centered on the profit motive “embedded” in other social realities, in this case, public health. As well as the capital-labor conflicts over the production of sanitary equipment, this crisis highlights a reality of the world of labor that is often less considered among the general public: namely the “professional consciousness” of workers and trade unionists, concerned with their health, viable economic production, as well as objectives of general interest. In this sense, it constitutes an observatory for the differentiated practices between firms, depending on the degree of social democracy in action. 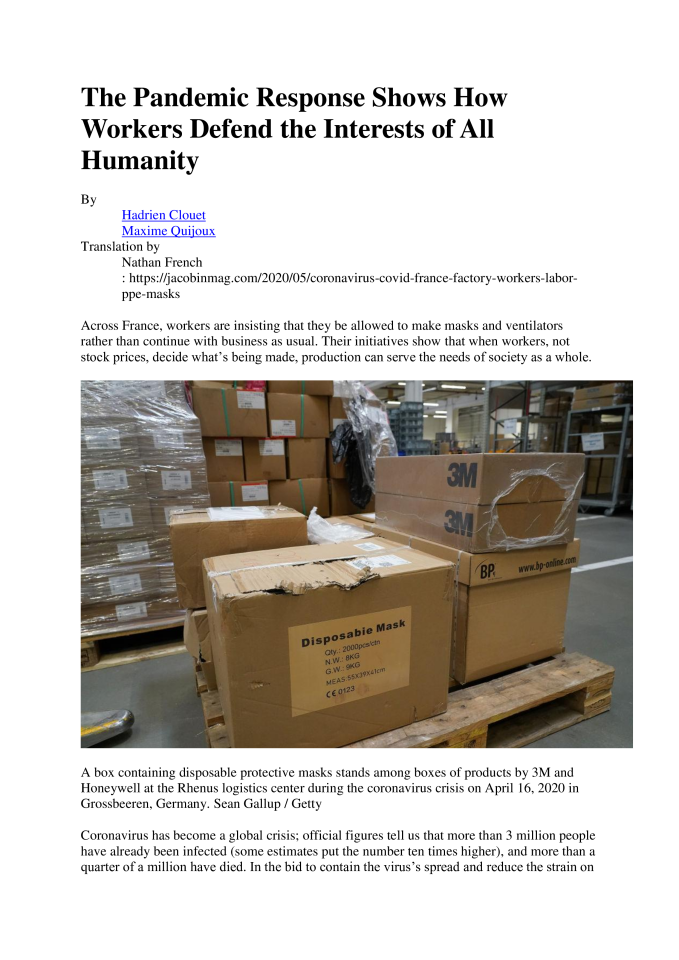