Analysis and spatial modeling of the indoor radon Swiss data

The present research deals with an important public health threat, which is the pollution created by radon gas accumulation inside dwellings. The spatial modeling of indoor radon in Switzerland is particularly complex and challenging because of many influencing factors that should be taken into account. Indoor radon data analysis must be addressed from both a statistical and a spatial point of view. As a multivariate process, it was important at first to define the influence of each factor. In particular, it was important to define the influence of geology as being closely associated to indoor radon. This association was indeed observed for the Swiss data but not probed to be the sole determinant for the spatial modeling. The statistical analysis of data, both at univariate and multivariate level, was followed by an exploratory spatial analysis. Many tools proposed in the literature were tested and adapted, including fractality, declustering and moving windows methods. The use of Quan-tité Morisita Index (QMI) as a procedure to evaluate data clustering in function of the radon level was proposed. The existing methods of declustering were revised and applied in an attempt to approach the global histogram parameters. The exploratory phase comes along with the definition of multiple scales of interest for indoor radon mapping in Switzerland. The analysis was done with a top-to-down resolution approach, from regional to local lev¬els in order to find the appropriate scales for modeling. In this sense, data partition was optimized in order to cope with stationary conditions of geostatistical models. Common methods of spatial modeling such as Κ Nearest Neighbors (KNN), variography and General Regression Neural Networks (GRNN) were proposed as exploratory tools. In the following section, different spatial interpolation methods were applied for a par-ticular dataset. A bottom to top method complexity approach was adopted and the results were analyzed together in order to find common definitions of continuity and neighborhood parameters. Additionally, a data filter based on cross-validation was tested with the purpose of reducing noise at local scale (the CVMF). At the end of the chapter, a series of test for data consistency and methods robustness were performed. This lead to conclude about the importance of data splitting and the limitation of generalization methods for reproducing statistical distributions. The last section was dedicated to modeling methods with probabilistic interpretations. Data transformation and simulations thus allowed the use of multigaussian models and helped take the indoor radon pollution data uncertainty into consideration. The catego-rization transform was presented as a solution for extreme values modeling through clas-sification. Simulation scenarios were proposed, including an alternative proposal for the reproduction of the global histogram based on the sampling domain. The sequential Gaussian simulation (SGS) was presented as the method giving the most complete information, while classification performed in a more robust way. An error measure was defined in relation to the decision function for data classification hardening. Within the classification methods, probabilistic neural networks (PNN) show to be better adapted for modeling of high threshold categorization and for automation. Support vector machines (SVM) on the contrary performed well under balanced category conditions. In general, it was concluded that a particular prediction or estimation method is not better under all conditions of scale and neighborhood definitions. Simulations should be the basis, while other methods can provide complementary information to accomplish an efficient indoor radon decision making. 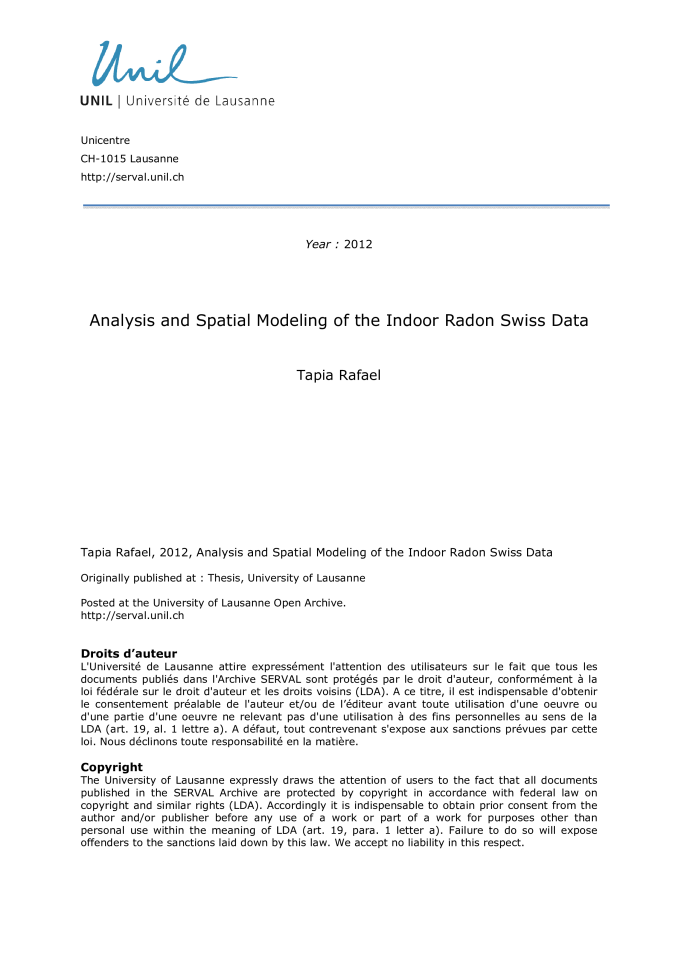