The French scholarly landscape of human skeletal studies does not lend itself easily to general overviews due to separation of related disciplines, regionalism, and, most importantly, deep historical origins. Due to separate developmental trajectories, there is no unified discipline of "anthropology" in France, a situation that is similar to the academic organization of other European countries, including Germany and the United Kingdom. When "anthropologists," either biological or sociocultural, interact in joint projects, a development that is encouraged but not formalized, this is considered part of an interdisciplinary approach. This situation is not unique to France, but is likely an outcome of colonization of, especially, parts of Africa, which fostered the development of ethnobiologie as part of ethnology (ethnologie) that includes ethnography, a subject that developed alongside but separately from physical anthropology in the early decades of the twentieth century in France (see Conklin 2013). Paul Broca, a medical specialist in neuroanatomy, is considered the "father of physical anthropology" in France (see below). Thus biological anthropology (also l'anthropologie biologique, bioanthropologie, or anthropobiologie), formerly physical anthropology (l'anthropologie physique), has a longer association with medicine and with paleontology and prehistory (i.e., Paleolithic to Neolithic periods)-stretching well back into the nineteenth century-than with archaeology (i.e., protohistoric and historic periods). In France, prehistory sprang from paleontology (contra Cleuziou et al. 1991, who cite an origin from physical anthropology); philosophy , with its inheritance from the siècle des lumières (the "Enlightenment"); and geology, a science that deals with the "natural history of mankind." With its diverse origins, the interdisciplinary ambition of such studies today is aptly summarized on 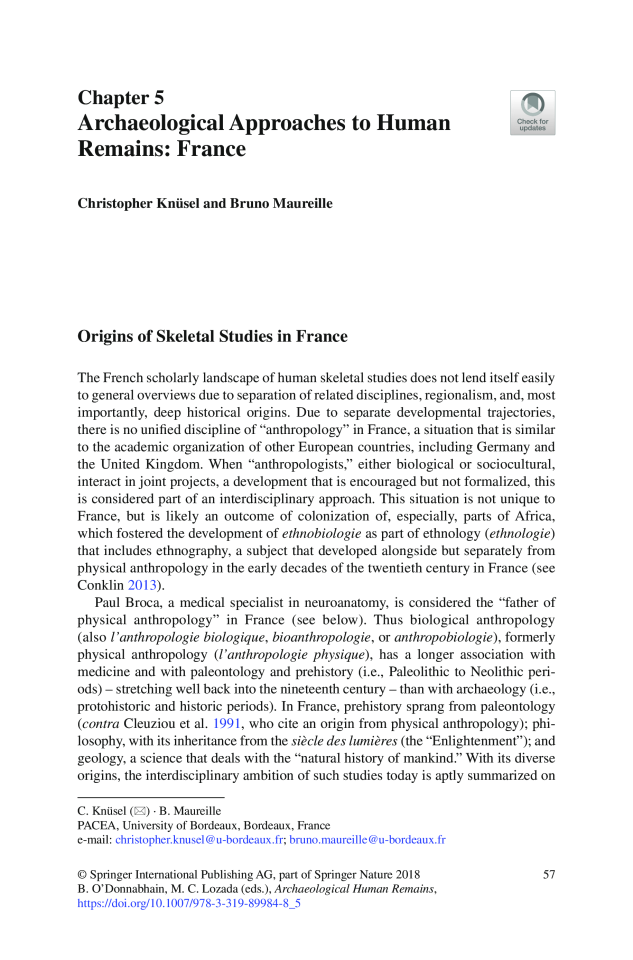