The DESIR Final Event took place in Zagreb on 6-7 November 2019, alongside the DARIAH General Assembly. The DESIR Final Event brought together the whole consortium and involved several Bodies of the ERIC to maximise the impact of the event. The aim of the meeting was two-fold. First, it was to opportunity to summarise the activities conducted throughout the project and showcase results towards the DARIAH community. Secondly, it proposed a wider discussion over sustainability and funding models with National Representatives prior to the General Assembly.Overall, 57 participants attended the event. The schedule has been structured to present the outcomes of each Work Package. As the project DESIR was divided into an evolving 6-dimensional process, main results can be summarised as follows:Dissemination and Innovation: the aim of this Work Package was to ensure a continuous dissemination of DARIAH service improvements, activities and research results within the relevant communities, academic stakeholders and other interested parties. Furthermore, the Work Package was in charge of organising main dissemination activities during the project and the DARIAH Beyond Europe workshop series (Stanford University, Library of Congress, National Library of Australia).Growth: this Work Package was concerned with the enlargement of the DARIAH membership targeting six countries (Czech Republic, Finland, Israel, Spain, Switzerland, United Kingdom). Membership could only be achieved in Czech Republic, the application was submitted and ratified by the General Assembly in November 2019. Nevertheless, in other countries, collaboration with DARIAH has been greatly strengthened and significant progress regarding DARIAH membership has been achieved.Technology: the Work Package delivered three demonstrators focused on bibliographical metadata. The demonstrators show the usage of tools for bibliographical metadata in various stages of the research process, e.g. extraction of entities, the collection and sorting of citations, visualisation of selected aspects of the data. These demonstrators were built with the involvement of the community of researchers through two Code Sprints organised in Berlin.Robustness: the aim of this Work Package was to strengthen the organisational structure of DARIAH. The activities undertaken had a multifaceted nature: the relationship with the user community was improved through the implementation of a centralised helpdesk; preliminary work towards the Marketplace was conducted; the EURISE Network (European Research Infrastructure Software Engineers' Network) was established with CLARIN and CESSDA; finally a renewed business plan building on existing strategic documents was developed.Trust: this Work Package contributed to DARIAH’s long-term sustainability by measuring acceptance and impact of DARIAH in new cross-disciplinary communities and core groups through a survey, in-depth qualitative interviews and strategic meetings. The analysedinformation collected from each source led to a recommendations and community engagement tool developed to share and translate the recommendations dataset for a broader audience.Teaching: the work carried out during the course of the project led to the implementation of a discovery framework and hosting platform for DARIAH learning resources, DARIAH-Campus. The platform was officially launched during the event. The goal of DARIAH-Campus is to widen access to open, inclusive, high-quality learning materials that aim to enhance creativity, skills, technology and knowledge in the digitally-enabled arts and humanities. 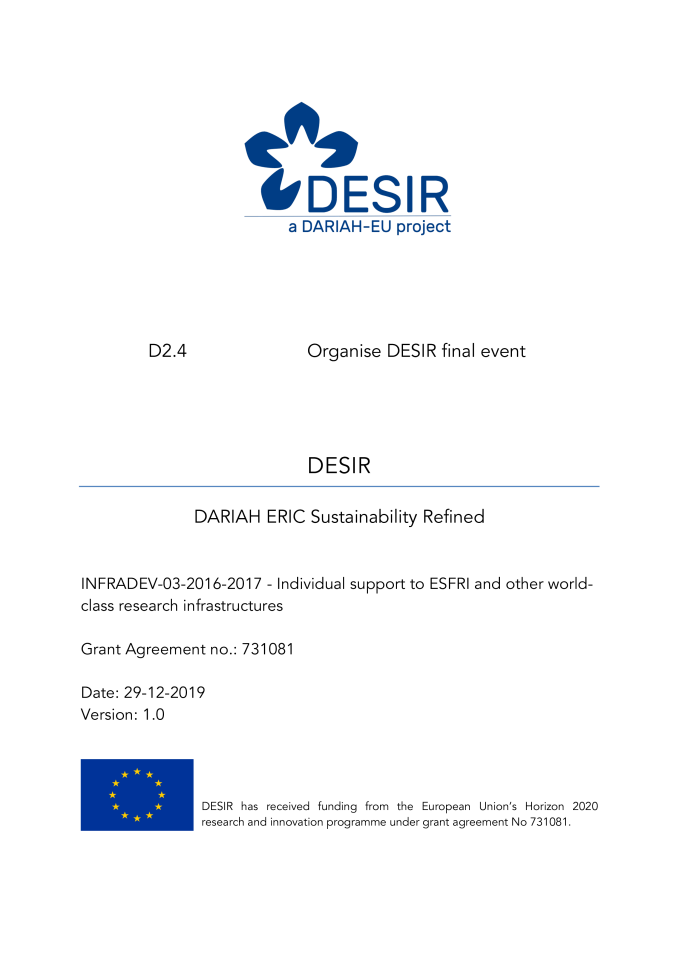