MULTI-SCALE APPROACH OF THE GREEN ROOFING POTENTIAL: APPLICATION TO THE PARIS AGGLOMERATION

Green roofs are experiencing a significant development in France since the early 2000s. In 15 years, the market has increased from 100,000 m² implemented / year to over 1.3 million. If the motivations for the implementation of green roofs are often multiple, their participation in urban storm water management issues and in urban heat islands reduction are particularly often cited (Li and Babcock, 2014). As shown for stormwater management (Versini et al., 2015a), a key element to achieve significant effects on the urban scale is the amount of roof area to be vegetated. It is therefore necessary to focus on the green roofing potential, i.e. the roof surface likely to be vegetated for a given urban area. In fact, this amount depends on many factors, relating to: (i) the physical characteristics of the buildings in the area (in particular, the existence of a flat roof which can accommodate green roofing), and (ii) the use and operating conditions of the buildings (more or less compatible with green roofing); but also: (iii) economic considerations on products used (in terms of installation and operation) and (iv) favorable or unfavorable regulatory realities (professional rules, planning regulations, incentive schemes...) (Chauveau and Gouvello, 2013). This paper will present the results of researches that aim on characterizing and mapping the potential of urban greening roofs at three different spatial scales: the scale of a municipality representative of the urbanization of the metropolitan area (the city of Créteil), the scale of a county of the first ring (Seine-Saint-Denis) and the scale of the Paris agglomeration (431 municipalities). The approach chosen to characterize this green roofing potential incorporates the principles of a methodology developed to assess the emissions of pollutants from roofs at an urban scale (Sellami-Kaaniche et al., 2014). It is based on the combination of systematic land cover data for the three considered scales (provided by the IAU-IF: Institut d'Aménagement et d'Urbanisme d'Ile-de-France) crossed with urban development and history of the regional architecture and the use of a statistical approach based on a sample of buildings. The calculation and representation of the GRP is adapted on the studied territorial level. The results shows that the GRP differs significantly from a county to another and also within a same county. 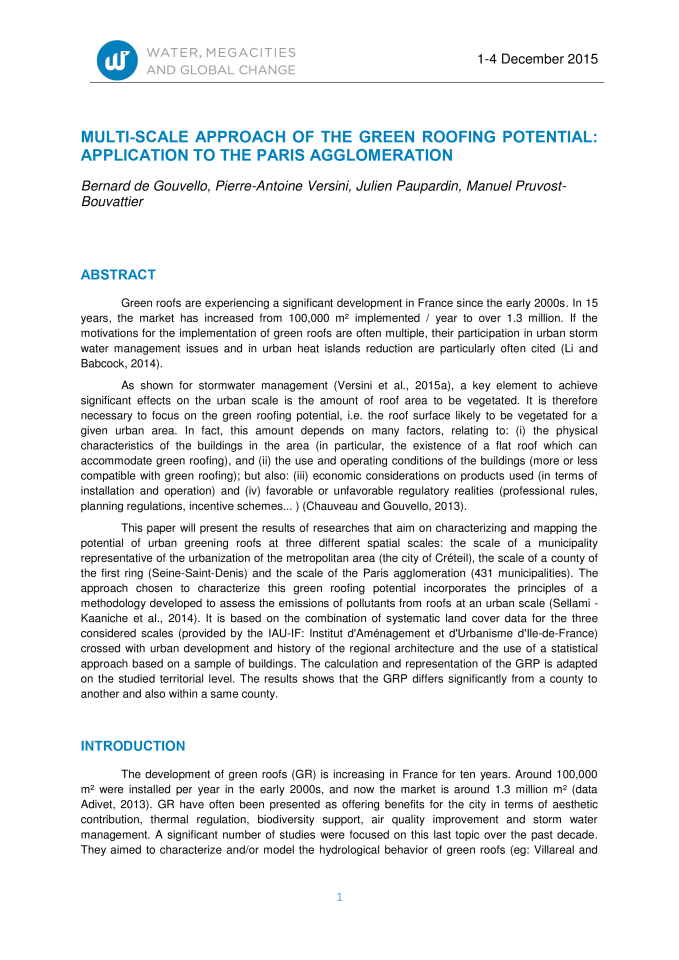