Confinement and Psychiatric Care: A Comparison Between High-Security Units for Prisoners and for Difficult Patients in France

This paper examines the uncertain meaning of confinement in psychiatric care practices. Investigating the recent expansion of high-security units in French public psychiatry, for patients with dangerous behavior (units for difficult patients) and for suffering prisoners (specially-equipped hospital units), we aim to understand psychiatry's use of confinement as part of its evolving mandate over suffering individuals with violent behavior. Although historically the epicenter of secure psychiatric care for dangerous individuals shifted from the asylum to the prison, a review of public reports and psychiatric literature demonstrates that psychiatrists' attempt to reclaim confinement as part of therapeutic practice underpinned the recent development of new units. Institutional-level analysis emphasizes psychiatry's enduring concern to subordinate social defense motives to a therapeutic rationale. Analyzing local professionals' justifications for these units in two emblematic hospitals, the paradoxical effects of a security-driven policy arise: they allowed the units' existence, yet prevented psychiatrists from defending a genuine therapeutic justification for confinement. Instead, professionals differentiate each unit's respective mission, underlining the concern for access to care and human dignity or defending the need for protection and safety from potentially dangerous patients. This process reveals the difficulty of defining confinement practices as care when autonomy is a core social value. 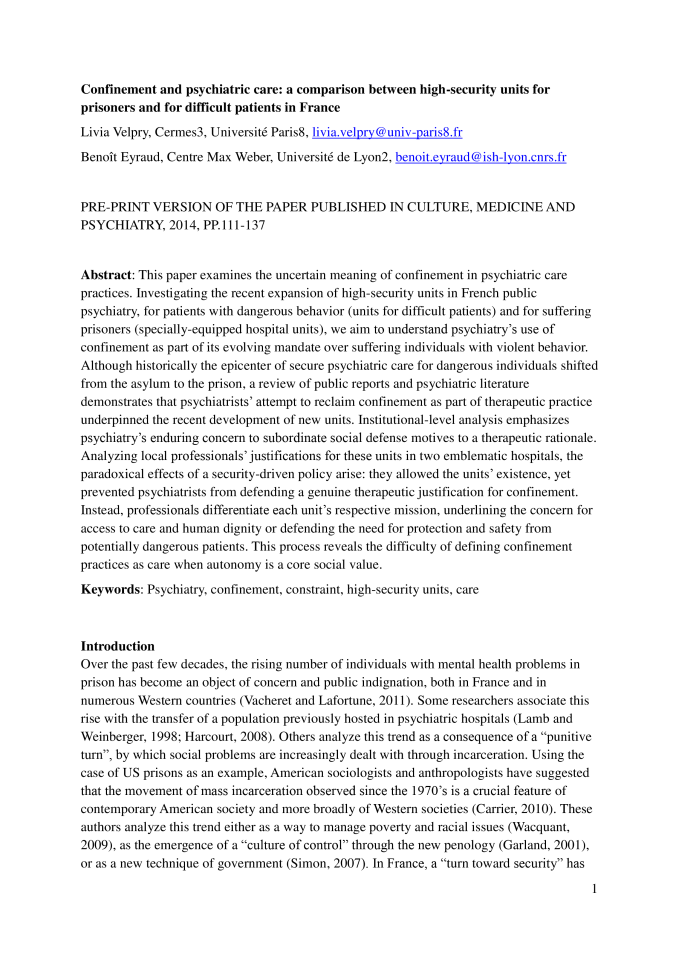