Chile is the second largest global producer of farmed salmon. The growth of salmon production has not been free of environmental challenges, such as the increasing use of pesticides to control the parasitic load of the sea lice Caligus rogercresseyi. The lack of the specificity of pesticides can potentially affect non-target organisms, as well as the structure and functioning of aquatic ecosystems. The aim of this study, was to understand the effect of pesticides on natural microbial communities to the addition of the anti-lice pesticide azamethiphos, deltamethrin and emamectin benzoate, and their potential impact in ammonium uptake rates in the coast off centralsouthern Chile and Northern Patagonia. The addition of pesticides on natural microbial communities resulted in a rapid response in ammonium uptake, which was significant for the single use of pesticide, azamethiphos and emamectin benzoate, as well as the combination, azamethiphos, deltamethrin and emamectin benzoate. In northern Patagonia, azamethiphos addition produced a 53% decrease in photoautotrophic uptake. However, an increase, although variable, was observed in chemoautotrophic uptake. Emamectin benzoate produced a 36 to 77% decrease in chemo and photoautotrophic ammonium uptake, respectively. The combined use of pesticides, also produced up to 42% decrease in both photo and chemoautotrophic assimilation. We conclude that the use of pesticides in salmon farming produces diverse responses at the microbial level, stimulating and/or inhibiting microbial communities with subsequent impact on nitrogen budgets. Further studies are necessary to understand the impact of pesticides in the ecology of central-southern and northern Patagonia, Chile. 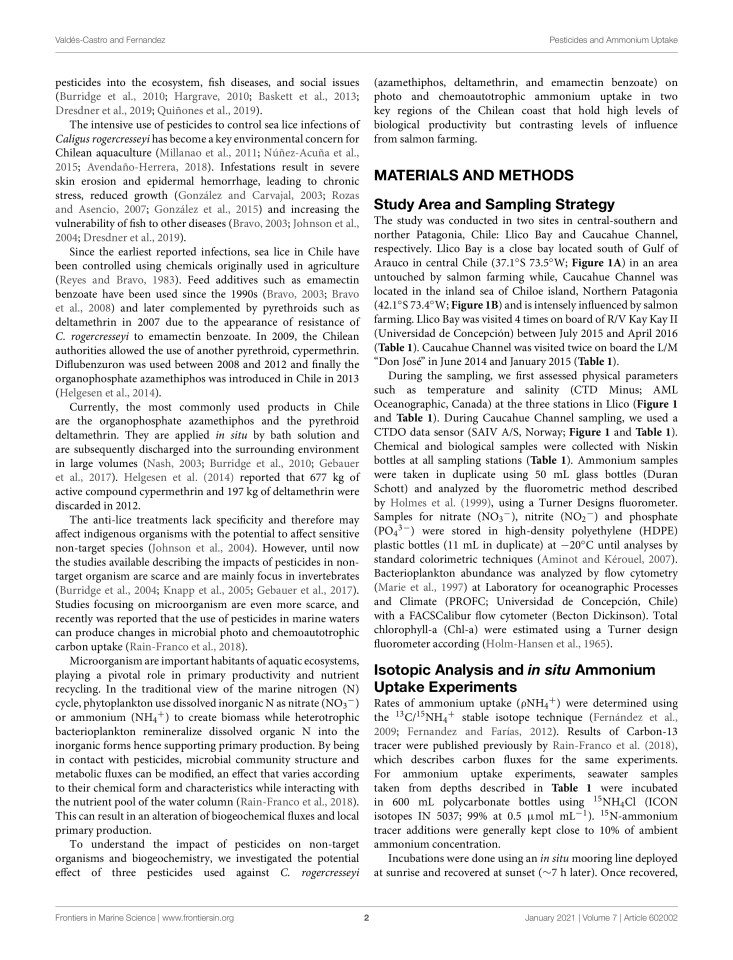