Neurofibromatosis Type 1 (NF1) is a genetic disorder characterized by partial loss of growth control that affects the central nervous system. NF1 has been consistently associated with cognitive dysfunction, although there is no consensus on the cognitive profile in NF1 or on brain-cognition relationships. To clarify the pattern of cognitive dysfunction, performance of 16 NF1 patients and 16 age- and sex-matched controls (mean age = 14.5 years, SD = 1.3) was compared on computerized tasks measuring perception, executive functioning (inhibitory control, cognitive flexibility, and working memory), and motor control. A further aim of this study was to contrast performance on tasks or task parts requiring varying levels of cognitive control to find out whether this could explain potential difficulties experienced by this population in different cognitive domains or at different stages of information processing. Repeated measures analyses of variance showed that group differences, indicating poorer performance of NF1 patients, varied as a function of the level of cognitive control required. Evidence was also found for more basic motor skill problems in NF1 patients. Furthermore, NF1 patients were generally slower than controls. Results are discussed in the context of what is known about brain-cognition relationships in NF1. 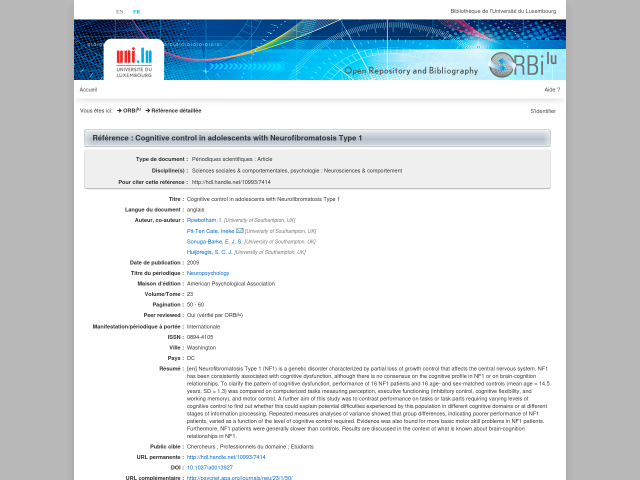