Testosterone plays a key role in the control of seasonal changes in singing behavior and its underlying neural circuitry. After administration of exogenous testosterone, song quality and song control nuclei volumes change over the course of weeks, but song rate increases within days. The medial preoptic nucleus (POM) controls sexual motivation and testosterone action in POM increases sexually motivated singing. Here, we investigated the time course of testosterone action in the song control nuclei and POM, at the gross anatomical and cellular level. Photosensitive female canaries were injected with BrdU to label newborn neurons. One day later they were transferred to a long day photoperiod and implanted with testosterone-filled or empty implants. Brains and blood were collected 1, 2, 9 or 21 days later. Testosterone increased POM volume within one day, whereas the volume of song control nuclei increased significantly only on day 21 even if a trend was already observed for HVC on day 9. The density of newborn neurons in HVC, labeled by Bromodeoxyuridine (BrdU) and doublecortin, was increased by testosterone on days 9 and 21 although a trend was already detectable on day 2. In POM testosterone increased the number and size of aromatase-immunoreactive neurons already after one day. This rapid action of testosterone in POM supports its proposed role in controlling singing motivation. Although testosterone increased the number of newborn neurons in HVC rapidly (9, possibly 2 days), it is unlikely that these new neurons affect singing behavior before they mature and integrate into functional circuits. 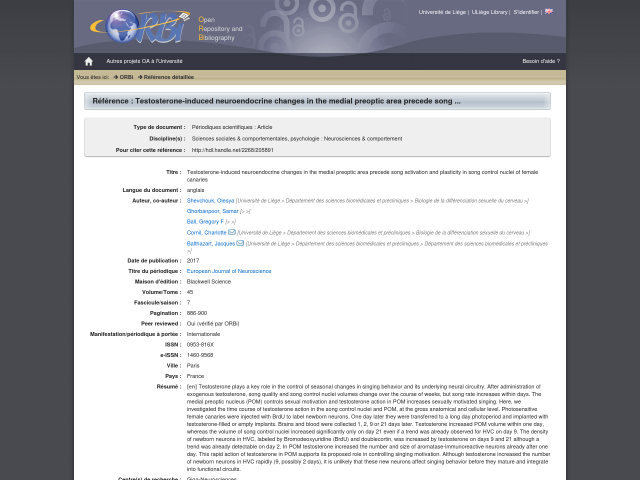