This poll, conducted October 20-24, 2006, is part of a continuing series of monthly surveys that solicit public opinion on the presidency and on a range of other political and social issues. The focus of this data collection was the upcoming election in New Jersey. New Jersey residents were asked whether they approved of the way President George W. Bush was handling the presidency and issues such as foreign policy and the economy. Respondents were asked how well United States Senators Frank Lautenberg and Robert Menendez, New Jersey Governor Jon Corzine, and members of the United States Congress were doing their jobs, whether the country and the state of New Jersey were moving in the right direction, and the condition of the national and state economies. Those polled were asked how much attention they had paid to the 2006 election campaigns in New Jersey, the likelihood that they would vote and for whom, their level of enthusiasm, which issues were most important in their vote, and whether they had favorable opinions of senatorial candidates Robert Menendez and Thomas Kean Jr., and former New Jersey governors Jim McGreevey and Thomas Kean Sr. Information was also collected on whether the campaign for senator from New Jersey was considered interesting, whether taxes would increase based on which party had control over Congress, and whether senatorial candidates were participating in negative campaigning. A series of questions asked whether the United States did the right thing in taking military action against Iraq, whether United States troops should be removed from Iraq, whether the war in Iraq was considered part of the war on terrorism, and whether New Jersey was prepared to deal with a terrorist attack. Additional topics included whether corrupt politics were common in New Jersey, whether illegal immigration is a serious problem, whether local property taxes were too high, whether the federal government had done all it reasonably could to improve airport security in New Jersey since September 11, 2001, and whether respondents know anyone who was hurt or killed in the September 11 terrorist attack. Demographic information includes voter registration status and participation history, political party affiliation, political philosophy, marital status, sex, religious preference, education level, age, household income, race, whether respondents had any children under the age of 18, household union membership, length of time living at current residence, and type of residential area (e.g., urban or rural). 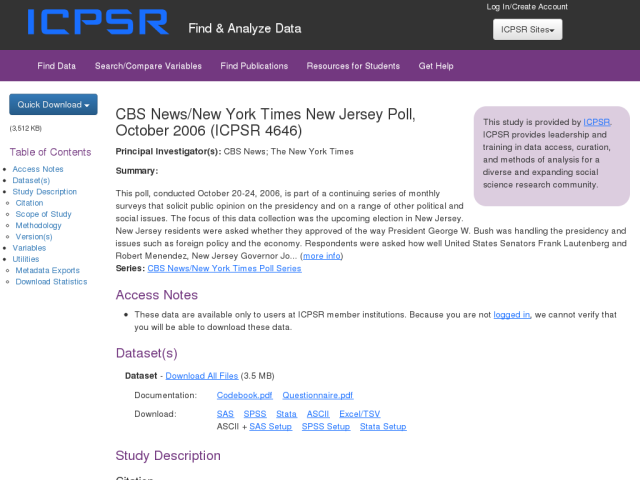