Public Law 94-171, enacted in 1975, requires the Census Bureau to provide redistricting data in a format requested by state governments. Within one year following the 1990 decennial Census (by April 1, 1991), the Census Bureau provided the governor and legislature of each state with the population data needed to redraw legislative districts. This collection contains the same substantive and geographic variables as the original Public Law 94-171 files [see CENSUS OF POPULATION AND HOUSING, 1990 [UNITED STATES]: PUBLIC LAW (P.L.) 94-171 DATA (ICPSR 9516)] but with the population counts adjusted for undernumeration. Adjusted Public Law 94-171 counts are supplied for a sample of one-half of blocks in the United States and a complete selection of areas with 1,000 or more persons. Each state file provides data for the state and its subareas in the following order: state, county, voting district, county subdivision, place, and block. Additionally, complete summaries are provided for the following geographic areas: county subdivision, place, consolidated city, state portion of American Indian and Alaska Native area, and county portion of American Indian and Alaska Native area. Area characteristics such as land area, water area, latitude, and longitude are provided. Summary statistics are provided for all persons, for persons 18 years old and over, and for housing units in the geographic areas. Counts by race and by Hispanic and non-Hispanic origin are also recorded. 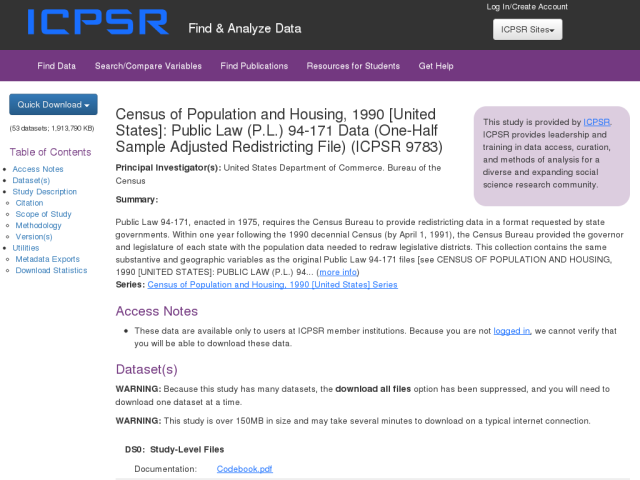