A High-Stakes Shift: Turning the Tide From GDP to New Prosperity Indicators

For more than half a century, Gross Domestic Product (GDP) has been viewed as the dominant indicator of economic and social progress. Its visibility and increasingly widespread use have contributed to the incorrect identification of economic growth (that is, increased GDP) with improved well-being for all. GDP’s supremacy as an indicator is being challenged, however: around the world, its limits are being questioned and solutions proposed for overcoming them. Given the broadly accepted idea that indicators affect reality, changing them is a high-stakes issue. Potentially, re-fashioning progress indicators may change our representations of the world, redefine our ends, and reinvent the means by which we pursue them. Such a change is part of a complex transformation currently taking place in our economic, social, political ideological systems. The four sections of this paper put forward the argument that the debate over new progress indicators is symptomatic of an historical turning point, and for this reason deserves careful attention. The first section reviews the specific context in which national accounting was established as an economic policy tool rooted in post-war social compromises. The second section discusses the three major justifications for the search for alternative indicators: social goals which economic growth captures inaccurately or not at all; the gap between economic growth and subjective assessments of "life satisfaction"; and, finally, the complex and urgent issue of the environment. The third section presents a concise overview of existing indicators that claim to supplement or replace GDP, dividing them among the three categories of justification described above and demonstrating the inextricable link between methodological and normative questions. From this follows the fourth and final section, which addresses the core questions raised by GDP and the problem of replacing it, and examines the hypothesis that our societies are at an historical turning point in which new compromises are emerging, in ways not yet entirely discernable to social actors. 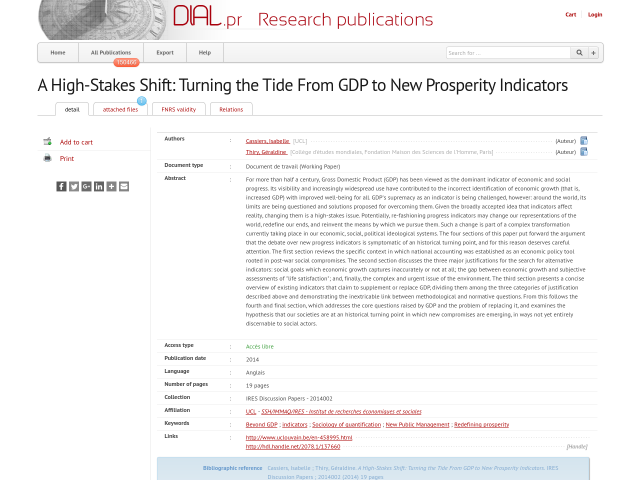