Human expertise at processing faces relies on how facial features are encoded: as a whole template rather than as a sum of independent features. This holistic encoding is less prominent for other-race faces, possibly accounting for the difficulty one encounters in recognizing these faces (the 'other-race effect'). Here, we tested the hypothesis that the magnitude of holistic face encoding can be modulated by racial categorization of the face. Caucasian participants performed a face-composite task with 'racially-ambiguous' face-stimuli (cross-race morphed faces, equally categorized as Asian or Caucasian faces in an independent task). The perceived race of the ambiguous faces was manipulated using adaptation. Experiment 1 showed that identical morphed face-stimuli were processed more holistically when perceived as 'same-race' than as 'other-race', i.e., following adaptation to 'other-race' versus 'same-race', respectively. Experiment 2 ascertained that the determining factor in the observed holistic processing modulation was the race of the racially-ambiguous face as perceived, rather than expected, by the participants, which supports the idea that the holistic processing of the face-stimuli was modulated by their race-categorization at the perceptual level. 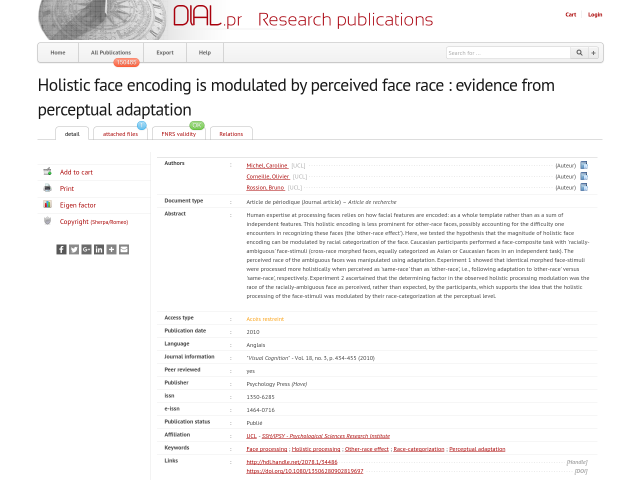