Pharmacokinetics trumps pharmacodynamics during cocaine choice: a reconciliation with the dopamine hypothesis of addiction

Cocaine is known to increase brain dopamine at supranormal levels in comparison to alternative nondrug rewards. According to the dopamine hypothesis of addiction, this abnormally large dopamine response would explain why cocaine use is initially highly rewarding and addictive. Though resting on solid neuroscientific foundations, this hypothesis has nevertheless proven difficult to reconcile with research on cocaine choice in experimental animals. When facing a choice between an intravenous bolus of cocaine and a nondrug alternative (e.g., sweet water), both delivered immediately after choice, rats do not choose the drug, as would be predicted, but instead develop a strong preference for the nondrug alternative. Here we report evidence that reconciles this finding with the dopamine hypothesis of addiction. First, a systematic literature analysis revealed that the delays of effects of intravenous cocaine on nucleus accumbens dopamine are of the order of tens of seconds and are considerably longer than those of nondrug reward. Second, this was confirmed by measuring response times to cocaine omission during self-administration as a behavioral proxy of these delays. Finally, when the influence of the drug delays was reduced during choice by adding an increasing delay to both the drug and nondrug rewards, rats shifted their choice to cocaine. Overall, this study suggests that cocaine is indeed supranormal in reward magnitude, as postulated by the dopamine hypothesis of addiction, but is less preferred during choice because its pharmacokinetics makes it an inherently more delayed reward than the alternative. Reframing previous drug choice studies in rats as intertemporal choice studies reveals that the discounting effects of delays spare no rewards, including supranormal ones, and that during choice, pharmacokinetics trumps pharmacodynamics. 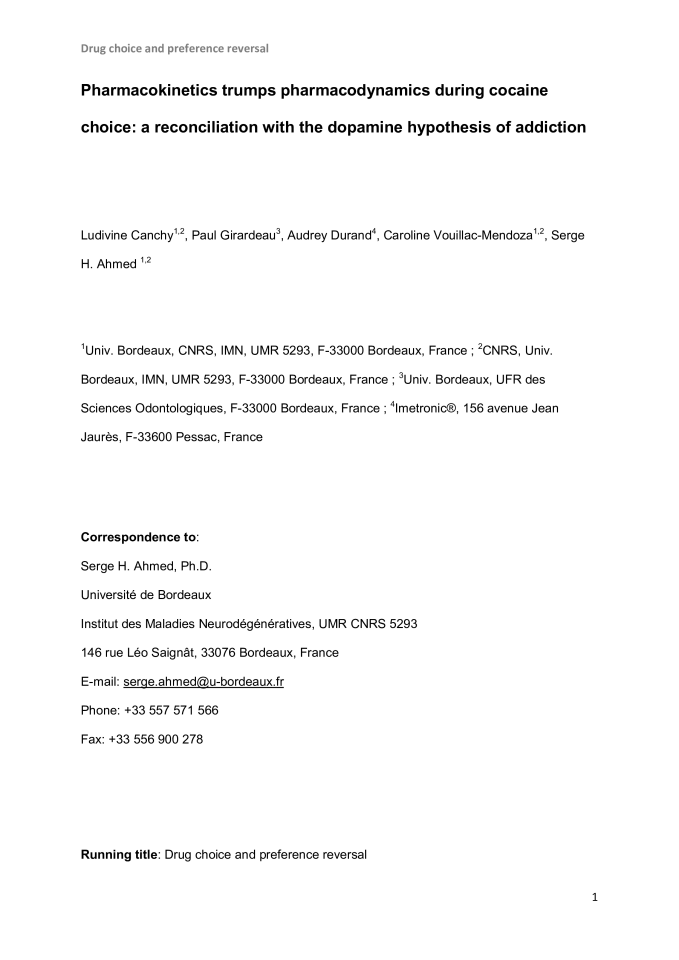