On totalitarianism and its levers : the study of Sismondi as a user’s manual

Jean de Sismondi is a perfect test case for identifying the tenets of totalitarianism : irrefutability, good reasons to hate scapegoats, to obey the State and let it intervene in markets as defender of the new order. Ludwig von Mises was first to claim that Sismondi was one of the main fathers of Nazi economic thought. His point can be demonstrated by showing the interrelatedness of nationalism and economic thought, as well as racist conceptions of mankind, in Sismondi's thought. Sismondi aimed at developing a military Republic, where a work guarantee for the peasantry through compulsory sharecropping on latifundiary tenancy would be imposed on proprietors, ensuring quick development of future recruits for the Republic’s militia (with the argument that sharecropping would increase proprietary gains, hence prefacing fascist demagoguery about « class cooperation »). Sometimes Sismondi openly pressured for colonial expansion for economic purposes, contradicting his own views on Say’s Law. He especially campaigned for the conquest of Algiers, mixing economic arguments with a humanistic discussion about the fate of the Arabs under Turkish rule and with piratry issues. Sismondi also contradicted himself on slavery, suggesting in a comment that slaves must work a few years to pay for their freedom, thus acknowledging implicitly owners’ economic rights on them. Sismondi was in fact close to Rousseau. Fascism has usually been defined as a nationalistic, pragmatic reconstruction of idealistic Socialism, and this reconstruction can be traced to the Rousseau-Sismondi line, even though they in fact intermerge. 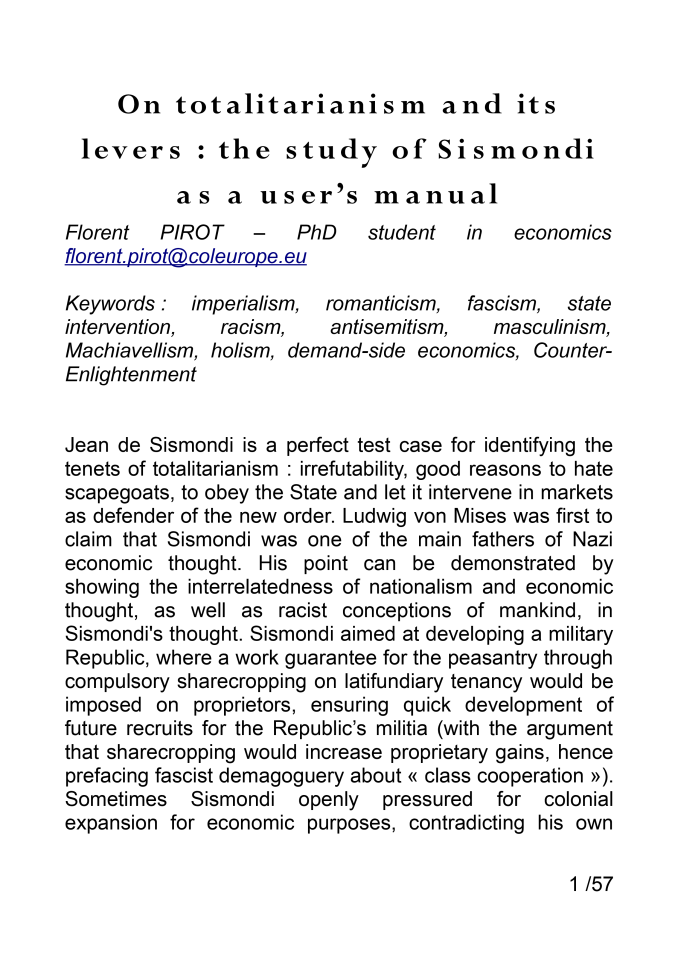