In her recent novel, The Dew Breaker (2004), Haitian-American writer Edwidge Danticat weaves together the lives of her bruised Haitian characters and their torturer, a former Tonton Macoute, all gone into exile in the US. Seven of the nine chapters were previously published as separate short stories and have been rearranged to form a novel. The reader is then led to unravel a narrative tangle made of many threads. The disparate nature of the book, its non-linear narrative, the plurality of stories and voices, the gaps in a fragmented, elliptic text all partake of an alternative approach to creative writing. Like a seamstress, the novelist pieces together individual stories, connecting them as the multifarious facets of a great whole. In the wake of francophone Haitian writers (namely Jacques Roumain, the author of Masters of the Dew, or Jacques Stephen Alexis who wrote General Sun, My Brother), Edwidge Danticat fictionalizes the traumatic history of a people confronted with violence and terror and engages in a complex intertextual play. Combining ethics and aesthetics, temporal and textual memory, the novelist explores facts and, rather than give answers, raises difficult questions. Her characters, whether victims or perpetrators, all strive to free themselves from a haunting past : is it ever possible to forgive so as to heal the pain ? Can one make amends for the harm that has been done to victims who seek redress ? 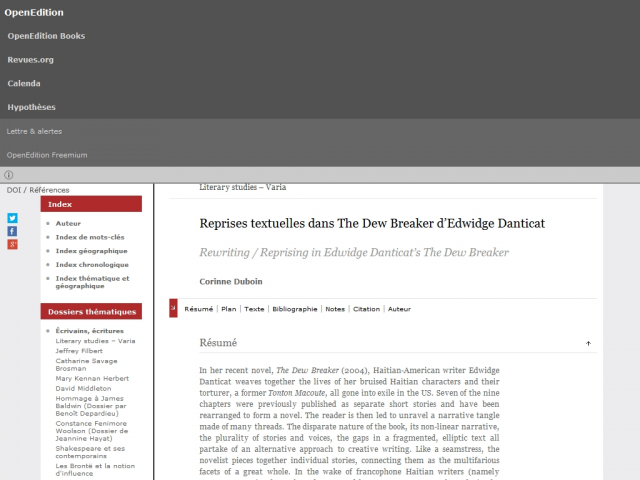