The humor of an intellectual of the 1440s. The Treatise in Defense of Virtuous Women (Tratado en Defensa de Virtuosas Mugeres) by Diego de Valera Diego de Valera wrote the Treatise in Defense of Virtuous Women in about 1438-1440, probably in response to the Corbacho, a book by the Archpriest of Talavera, which attacks women, who are held responsible for all failings. Diego de Valera, on the contrary, taking as an example the noble women of the Bible and of Antiquity, extols the virtues of chastity, the sense of honor and the great courage of the ladies whose story he knows. Beyond defending women, who are perhaps capable of the qualities usually attributed to men, in his exposition and even more in his scholarly notes, Diego de Valera’s treatise is heavy with irony against the long pieces of rhetoric by the intellectuals of his time and is filled with a true sense of humor as well as erudition. 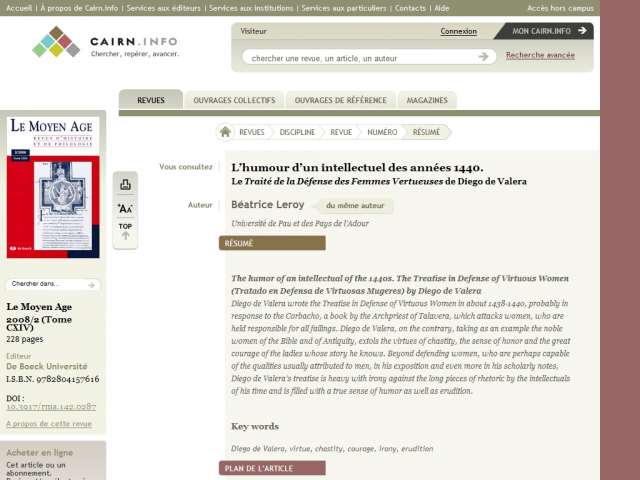